Doing different things with the two hands at the same time, like rubbing your stomach while padding your head, is difficult. Drawing a circle with the left hand while drawing a square with the right hand is nearly impossible. Studying interference between the hands illuminates the "dark side" of bimanual coordination. While the two hands normally benefit from "talking" to each other to achieve one common goal, this cross-talk is detrimental when we want each hands to perform independent actions. By finding the mechanisms through which the hands interfere with each other when they move independently, researchers hope to learn how the hands interact when they have to move coordinated.

One task that had been used extensively to study bimanual interference is continuous circle drawing.  You can perform the self-experiment by drawing circles with both hands at a pretty high speed. Most likely you will prefer to draw circles in a mirror-symmetric fashion, i.e. one hand moves clockwise, the other counter-clockwise. The spatial quality of circles drawn symmetrically is higher than those drawn asymmetrically, with both hands moving clockwise or counter-clockwise (Semjen et al., 1995). Also, when you try to increase the speed of asymmetric movements and go as fast as you possibly can, you will most likely show some spontaneous transitions into symmetric performance (Kelso, 1984). These all are indications for your natural preference to move the two upper limbs in mirror symmetry.

Interactions on the spinal level

One hypothesis is that these interactions are happening very close to the motor output, i.e. on the level of the spinal cord.  The idea here is that phylogenic older behaviors, such as swimming or walking, have put into place the preference for in-phase or anti-phase movements. While most of the fibers from the left motor cortex go to the right hand, about 10% of all cortico-spinal fibers go uncrossed to the left hand. It is possible that these projections make it easier to perform mirror-symmetric movements (Carson, 2005). An extreme example of such cross-talk can be observed in people who are born with the "congenital mirror syndrome". These individuals probably have many more uncrossed fibers, and when they perform an actions with one hand, the other hand shows small involuntary twitches.

However, it is unlikely that the bimanual interference in normal individuals is caused by these fibers. This conclusion can be drawn from the study of patients who underwent a surgical removal of the corpus callosum, a massive fiber bundle connecting the two hemispheres. These patients are actually able to draw a circle and a square at the same time (Franz et al. 1996). In the bimanual circle drawing task, callosotomy patients do not show a preference for symmetric movements (Kennerley et al., 2003). They exhibit something much stranger: one hand can move at a different speed than the other hand, so that the hands lap each other. This shows that fibers connecting the two hemisphere, rather than uncrossed cortical-spinal fibers, are the main cause for the tendency to move the upper limbs in symmetry.

In a series of studies, Herbert Heuer and colleagues (e.g., Heuer, 1993) have shown that many interference effects are "transient", that is they disappear when subjects have enough time to mentally prepare their movements . Such findings have led to the hypothesis that cross-talk arises through interactions during movement planning, that is, when the parameters of the movements are specified. In research conducted at the Cognition and Action Lab at University of California, Berkeley, we have focused on the notion that interference between bimanual actions can depend heavily on the way the movements are instructed, and consequently, represented by the participant. For example, the time to initiate movements with different movement parameters is greater than the time to initiate symmetric movements, but only when the movement are instructed with symbolic cues. When movements are specified by presenting the target locations directly, the movement parameters are not part of the action representation, and consequently no interference between the two actions arises (Diedrichsen et al., 2001).

Thus, we think that much of bimanual interference is based on a representation of abstract actions codes. These action codes may encompass the features of the targets of reaching movements or the intended consequences of actions (Hommel, 2001). This interference can be found to be abolished following callosotomy (the surgical removal of the fiber-band that connects the two cerebral hemispheres). For example, when callosotomy patients have to produce short force pulses with their left and right hand, they are as fast to initiate force pulses of the same as different target amplitudes. In contrast, age-matched controls show a substantial reaction time cost in this situation (Diedrichsen et al., 2003b).

In agreement with this finding, Mechsner et al. (2001) recently reported that bimanual interactions in the continuous circle drawing task can be dramatically altered when the perceptual consequences of such movements are manipulated. Both findings argue that the interference in this bimanual task is based rather on a more abstract representation of the action than on low-level interactions between the motor implementation processes of the two hands. 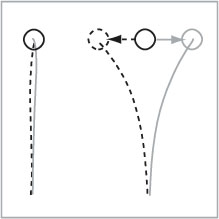 Another dramatic demonstration of the independence of the two hands comes from a study using online adjustments during bimanual reaching movements (Diedrichsen et al. 2004). Adjustments of hand trajectory occur very quickly (under 200 ms) when a target is displaced during a reaching movement. In the bimanual case, even when both targets are displaced in different directions, these rapid corrections are also observed and only delayed by 20 ms compared to unimanual reaches, with little change observed in movement velocity and accuracy. These results suggest two independent "autopilots", ensuring that each hand reaches its target location. These corrections do not require eye movements or shifts of visual attention towards the displaced target(s). However, when one hand adjusts for a target displacement to the left (dashed) or to the right (gray), the other hand is briefly perturbed in the same direction (see Figure). While the source of this cross-talk remains to be determined, the main insight is that the interference in bimanual movements is strongly reduced or absent when we directly reach for targets or when other external stimuli help us represent these otherwise difficult movements. Thus, it is most likely the difficulty to represent two conflicting spatial plans that limits our ability to pad our head while rubbing our stomach. Put simply, we shouldn't blame the hands for a limitation in our heads.

In recent work (Diedrichsen, in press) we studied neural correlated of interference in the bimanual reaching task in functional magnetic resonance imaging (fMRI). Participants executed symmetric or asymmetric reaching movements either cued by the spatially by presenting the targets directly, or symbolically by presenting letters (F for forward, S for sideways). A large reaction time cost was again only observed when symbolic cues were in conflict (respond to FS, compared to FF).  This conflict caused increased activity in PreSMA and the cingulate gyrus, the same areas that are active when you try to perform cognitive interference tasks, such as the Stroop-test. This supports our notion that bimanual interference occurs when we try to decide what to do with each hand, rather than how to do it.
However, both in the symbolic and spatial cueing conditions, we observed activity in the posterior aspect of the superior parietal lobe, an area that is responsible for spatial planning of movements.  Even though participants can perform bimanual movements in asymmetric directions rather effortlessly, the interference occurring during the spatial planning of the movement left a neural trace.