After the neocortex, the cerebellum is the largest structure of the human brain. It's highly folded cortex contains more than half of the neurons in the central nervous system. Historically, the cerebellum has been thought to be involved in motor control. However, research over the last 30 years has clearly shown that most of the human cerebellum is dedicated to cognitive functions, such as working memory, cognitive control, action observation, language, and social cognition. In the evolution from simple mammals to humans, the cerebellum has enlarged like no other brain structure (Barton & Vendetti, 2014; Sereno et al., 2020), suggesting a special role in the development of human intelligence. However, what specifically the cerebellum contributes to cognitive function, is still unclear (Diedrichsen et al., 2019).

For the last 15 years, our lab has developed analysis tools to study the human cerebellum using magnetic resonance imaging (MRI). Made publicly available as the SUIT toolbox, these functions allow for the careful anatomical alignment of cerebellar data across participants and provide methods for data analysis and visualization. 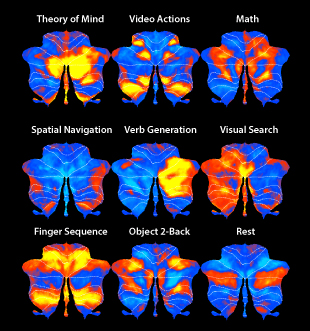 More recently we have conducted a large-scale study to develop a comprehensive new functional atlas of the human cerebellum (King et al., 2019). For this study, we created a multi-domain task battery that includes 26 tasks and is designed to cover most aspects of human mental activity, including language, memory, math, abstract thinking, motor control, mental imagery, and motor control. Participants in the study were scanned for approximately 6 hours each. Based on the data, we developed a functional map of the human cerebellum that characterizes the function of each cerebellar region in unprecedented detail. We showed that the new map can be used to predict the functional boundaries in the cerebellum for new tasks and for new participants. Importantly, this parcellation does not align with the anatomical subdivision of the cerebellum into lobules. The new atlas is publically available for download and can be viewed online using our Atlas Viewer .

This research is supported by a grant from the CIHR (PJT 159520), and the Canada First Research Excellence Fund (BrainsCAN to Western University).