In every day life, we use our two hands together. In order to achieve our goals, our hands' movements have to be finely coordinated. Activities where bimanual coordination is especially important include:

Coordination between our two hands seems effortless and automatic. However, to appreciate the complexity of this coordination, try the following: choose any of the activities above (except driving!) and try to do them together with another person. One person is using only the left hand and the other person only the right. Activities that seemed easy before, suddenly become very difficult and take a lot of coordination between the two persons.

Below you can see a example of skillful quadro-manual coordination. The scene is cut from the French movie "City of lost children" and shows the two heads of the orphanage, the octopus, cooking. Carefully look at what the hands are doing! 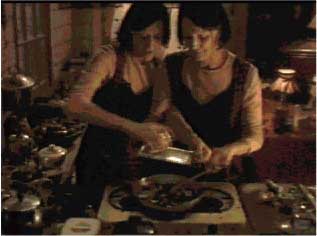 Important insights from the study of callosotomy patients

In my research I ask the question: how does the nervous system accomplish this coordination? One important hint comes from patients who underwent a surgical removal of the corpus callosum, the massive fiber tract that connects the two cerebral hemispheres, as a treatment against severe epilepsy. These patients demonstrate uncoupling of bimanual movements, such that they can perform movements more independently with left and right hands (see bimanual interference). On the other hand, they have difficulty learning new bimanual skills, such as drawing something with edge-a-sketch (i.e. Preilowski, 1972). However, they appear to show astonishing little deficits in coordinating well-learned bimanual movements (Franz, Waldie, & Smith, 2000). For example, one patient liked to demonstrate her skill in quickly tying her shoe laces with closed eyes. This suggests one of two scenarios: either well-learned bimanual movements are controlled by one (e.g. the dominant) hemisphere, or there exists a subcortical locus that integrates and coordinates the cortical commands to the two hands.

The role of the cerebellum in bimanual coordination

Given these results, I decided to test the role of the cerebellum in a natural coordinative behavior during bimanual object manipulation in detail. This coordination is easily demonstrated: hold a heavy object (for example a full water bottle) on the flat palm of your hand.  Ask another person to quickly pick up this object. You will observe that the hand that held the object (your postural hand) will be perturb in the upward direction due to the sudden relief of load. Now pick up the object yourself with your other hand at the same speed.  You will find that your postural hand compensates for the change in load and remains stable even when the object is lifted. In studying this behavior we first found that such anticipation of the load depends on us executing the action ourselves (i.e. is based on the efference copy of this action).  The same postural adjustment can not be learned when we see a robotic arm approach the object and pick it up, even if this is repeated many times in the same fashion (Diedrichsen et al. 2003). As would be expected from above, the coordination between the hand is preserved in patients without a corpus callosum.  To test the cerebellum as a candidate site for subcortical integration of the two motor commands, we tested patients with damage to this structure (Diedrichsen et al., 2005). Surprisingly, even these patients showed a relatively preserved coordination, at odds with the hypothesis that the cerebellum is essential to predict and compensate for the consequence of self-produced actions. However, cerebellar patients were not able to modify this behavior or to learn a similar behavior in a new context.  This indicates a critical role of this structure in the plasticity of bimanual motor skills, but not in their long-term storage.

Currently, I investigate exactly what exactly is learned when we acquire a new bimanual skill. This question is not restricted to bimanual coordination, but extends to many other complex motor behaviors consist of the coordination between different aspects of movement. For example, when throwing a ball, the forward movement of the arm and the opening of the fingers for ball release have to be tightly coordinated. How does the brain learn and represent the coordination between these two movement components? When do two movements become one? What parts of the brain are involved as this new skill is learned and consolidated?