We use high-resolution functional imaging techniques in combination with novel analysis techniques to map accurately movement representations in each single participant. The image shows for example the activation elicited by a single finger movements in the hand area of primary motor cortex of a single participant. We show roughly a 2cm x 2cm patch of the neocortex. These representations are highly reliable in each participant and can be replicated in imaging sessions separated by months. Each participant has a highly individual pattern of activation in primary motor cortex, very much like an individual fingerprint. 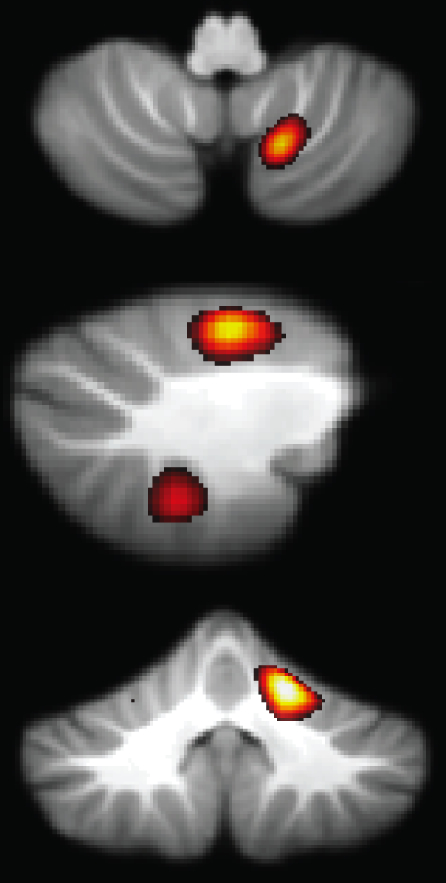 Using similar imaging techniques we can also show representation of single finger movements in the cerebellar cortex (Wiestler et al., 2011). Technically, this is quite challenging, as the representations are very small and fractured. Simple averaging of activation across multiple participants allows us only to observe that movement related regions are activated, but not whether and how individual movements are represented. As in the neocortex, finger representations in the cerebellum are highly individual and variable across subjects. We therefore use multivariate techniques to determine, on a subject-by-subject basis, if there are any differences between activation patterns related to each finger. This information map (see image) can then be averaged across individuals. We were able to reveal two finger representations, one in superior motor representation in lobule V, one in the posterior motor region in lobule VIII. 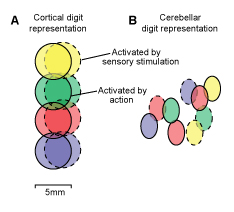 Our new multivariate analyses techniques (Diedrichsen et al., 2011) also allow us to measure the spatial size and arrangement of different representations. The size (or more precisely spatial smoothness) of representations in the neocortex are on the order of 4-5mm, but substantially smaller in the cerebellum. Furthermore, sensory and motor representation are aligned in a highly consistent manner in the neocortex, but are seemingly randomly interspersed in the cerebellum. One potential role for such an arrangement may be that it enables the cerebellum to rapidly form novel motor to sensory mappings.